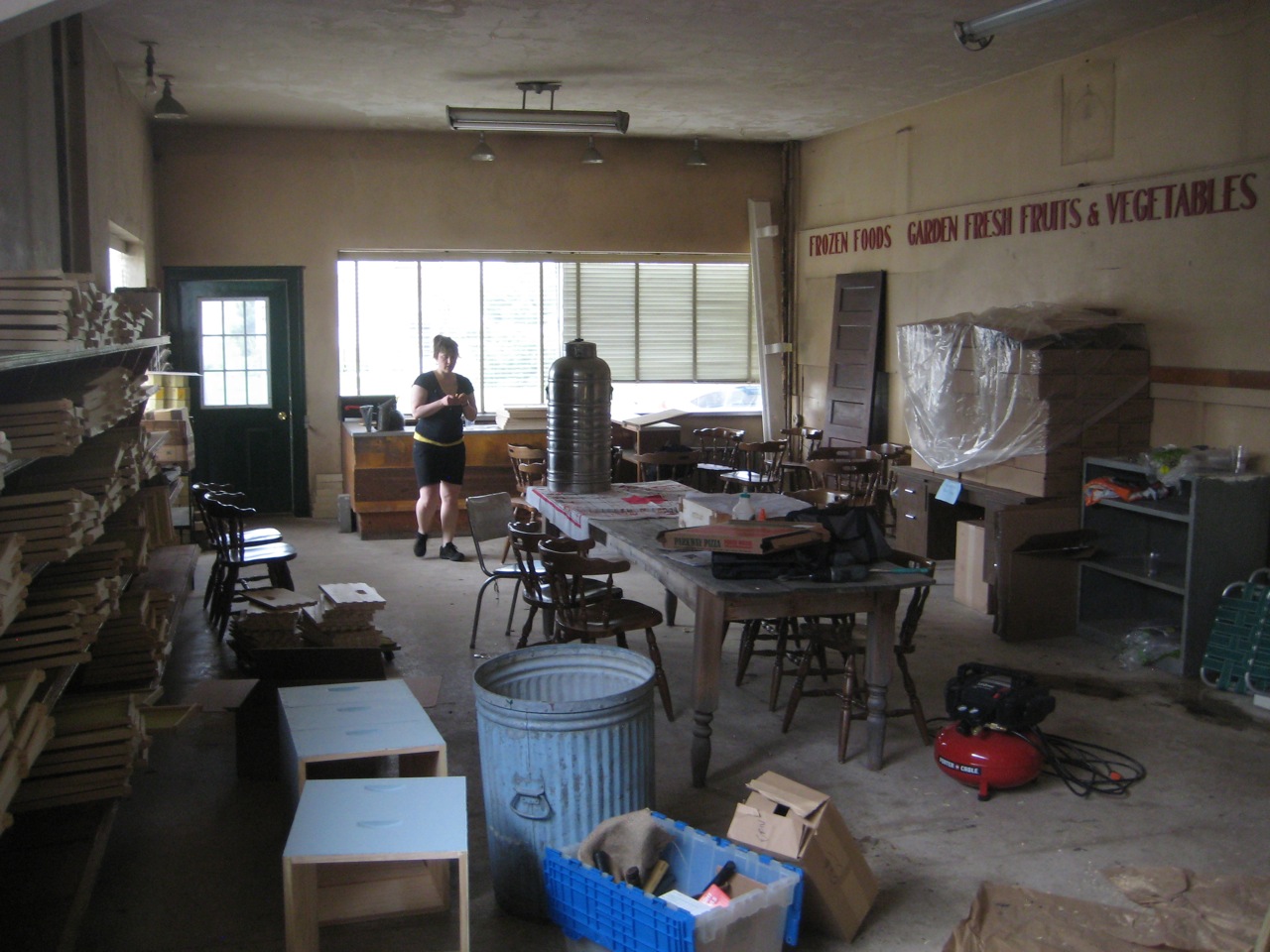 Photo above: The Honey House-to-be, with Erin Rupp working to get the premises ready for business.

How did twenty shops in twelve blocks happen? And what’s happening now? A 1950s history of baking has a map showing “Effective Market Area of Retail Bakeries” – explaining that a radius of about 2-3 blocks around a shop guarantees local customer loyalty. So that explains the 1930-era bakeries at 34th, 38th, and 41st Streets.

Lack of home freezers, a spouse at home in the daytime, fewer cars, and reliable streetcar or bus lines can also explain the ample storefronts of decades past. And the quantity of options was even bigger, with a tiny detour — just one block east or west, storefronts on 41st and 43rd Avenues made the 1930 total twenty-six stores in a twelve-block span.

Today, the street boasts just one market along that length. But you can also get lunch, coffee or bread (Turtle Bread, Blue Door Pub, Riverview Wine Bar and Cafe), see a movie (the Riverview Theater), buy flowers (Mother Earth Gardens), and style your hair or wash your clothes. Soon, you can also learn about, process or buy honey (The Honey House).

Humble buildings, their tenants, and their ongoing evolutions are also “history.” As a native of the area, I chose to study the dozen blocks of 42nd Avenue from Lake to 42nd Street, for an example of then-and-now. The discoveries didn’t disappoint, and they match insights to be found throughout South Minneapolis’s history. They also suggest cycles of development, immigration, and settlement.

For example: when 42nd Avenue meets 34th, 38th, and 41st streets, the buildings are solid brick of a shared style, with white or pink tile accents. They were built from 1925-28. At these corners, over fifty years at least, there were meat markets, grocers, bakers and a drugstore. The brick buildings aren’t accidentally placed, because those corners are where the streetcar route either turned or met a bus line.

For a few years in the 1920s-30s, two immigrant and ambitious neighborhood Norwegians competed at close range, facing one another across the street, right where Turtle Bread is now. Bernard Twedt, the younger baker, had other shops elsewhere before he set up at 4205 East 34th in 1926. His new neighbor as of 1929, at 4204 East 34th, was Martin T. Martinson, thirteen years older and also a seasoned baker with other prior locations. Imagine the tension!

The trolley line originally went east on 41st, toward St. Paul and the Ford plant. (Now, the #9 bus line turns west, to end at the Hiawatha light rail station.) Next to Martinson and Twedt’s shops, over the years, there were successive grocers or butchers. Other stores were in the fronts of homes, usually on corners – and when you see any modest home with a cut-off entry corner or a front that comes closer to the sidewalk, it’s a sure bet it used to be a store. This explains the 3600 and 3665 buildings, for example, which had shops as early as 1923.

Both Martinson and Twedt were peripatetic and ambitious, like other bakers. They had other shops elsewhere before and after their 1920s showdowns. Ironically, both hung on until 1946 – when Twedt had not just his shop at 4117 East 41st, but was back at 4203 East 34th.

First indications of 42nd as a food-retailing destination showed up in 1908, when William McConnell had a store at 3200-42nd South. His store/home was the only option then, and the neighboring lots were largely empty. The streetcar line came in 1912, and then more grocery-selling permits were filed at other blocks further south. By 1924 you could find a grocer or a baker about every block or so, heading south.

But by the late 1920s, many of the new homes had detached garages – signaling not just “confident growth” for residents, but “eventual departure” far down the road for walkable neighborhood merchants. Cars surely figured in the life of John S. Iverson, who was a machinist and then a Ford plant assembler until he began the grocery life in 1922. Maybe he’d taken that streetcar, seen the development along 42nd, and been inspired. By 1922 he was a grocer instead, and by 1927 he had a store at 3204-42nd.

Living in or above the shop, or at least nearby, kept the community close. Bakers in particular needed to come by at odd hours. Richard Israel, a German immigrant, had shops all over south Minneapolis before he settled at 4104-42nd, and he lived within a 10-block radius of the street most of his life (1884-1972). By the same token, several retirees and women kept the shop as the home: Max Wolfgang, at 3740-41st, was an engineer and machinist before he retired to take on a shop formerly run by Rose Foley at that address. And the redoubtable Anna Krafty, married to Joseph the painter, managed a store at 3601-42nd (across from Sanford Middle School) as well as managing her five kids.

Joe Howard, current owner of the brick mini-mini-“mall” at 4100-42nd, has seen the street change since the 1970s when he first showed up. “There were butcher shops here, groceries, bakeries, everything,” he recalls. “But by the Seventies, women didn’t push baby carriages down to the corner store any more.” Apart from the Alamane hair salon on the corner, and his own accounting office next to it, the former shops he owns are all now apartments. His wife Katherine once ran her physical therapy practice in one of the storefronts.

He wishes he’d bought other properties on the street, and welcomes the newer retail further north on 42nd. So too do Cheryl and Terry Reidy, long-time owners of Reidy’s Market at 3904 – it’s been a store since at least the 1950s. “It’s a good corner for a food business,” says Cheryl, who points out the nearest place to get groceries would be Lake and Minnehaha. They live in St. Paul’s Highland neighborhood, just across the Ford bridge, and their dedication to the Longfellow area will soon be even more evident when a mural of the “Seven Oaks” area’s history is painted all along their building.

Reidy’s offers a pretty full complement of necessities, including fresh fruits and veggies, as well as . . . video rental! (Including a curated selection of “Oldies but Goodies.”) In the bargain, there’s a piano behind the counter: “it was my mother-in-law’s,” explains Cheryl. “It needed a home, and Terry’s several siblings already had pianos in their homes.” (No word on whether recitals are scheduled.)

Terry Reidy is glad to see “there’s a lot more families around here now; there’s more activity during the day.” And he’s extra-encouraged to be supplying occasional needs to the developers of the Honey House, a different kind of “food marketer” in development just a block away, at 3957-42nd.

Historically a grocer’s/meat market locale, that address last hosted food retail in 1956 and has sat idle since. But now it’s home base for the Beez Kneez honey & beekeeping enterprise operated by Erin Rupp and Kristy Allen. Their presence secured through a successful Kickstarter campaign (see http://www.thebeezkneezdelivery.com/), these entrepreneurs of bee knowledge and bicycle-based honey delivery are renovating an historic spot.

Their building was put up in 1911, which makes them the newest business in one of the street’s oldest locations. Their building is so old that its “meat locker” required refrigeration from ice blocks. Pointing at the high-ceilinged space, with Deco-styled lettering still in place, Rupp explains that “We’ll have office space and retail in the front here, and then the honey extraction and workshops can happen in the back.” The city has multiple hobbyist beekeepers, as well as hives in nonprofit locations (http://communitybeesonbikes.org/hosts.html), and so 42nd Avenue will now be the hub of a growing honey culture.

It’s easy to find symbolic hope in how the cluttered wrap-around yard at 39th Street and 42nd Avenue will become the Honey House gardens, but this isn’t really a nostalgic days-gone-by/moral uplift story. Simply put, the sheer quantity of food-buying options in the past implies an energy and confidence that now matches the innovative recycling of food retail across the Twin Cities. Many, many “ordinary avenues” now host greater variety than ever anticipated, back in 1910 or 1930: Mercados! Little restaurants! Halal! Nail salons! Yoga studios! Bike shops! The stories those places can tell, amid the stories they once hosted, ensure that history just keeps happening.