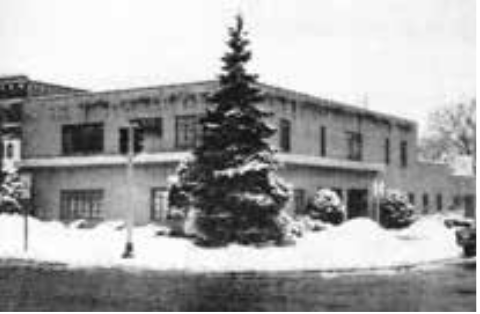 You’ve no doubt driven by the two story brick building at the southwest corner of Cedar Ave. and 42nd St. hundreds of times, but you’ve probably never thought about the people and organizations that have occupied 4200 Cedar Ave. over the years. Here’s a “drive-thru” history of the building.

Adair Dance Studios. The building was constructed in 1952 to provide space for Ruth Bakken’s Adair Dance Studios. Mrs. Bakken had started offering dance lessons in the basement of her home in the mid-1940s. The classes grew in popularity until, according to an article in the Minneapolis Star, her school had more than 450 pupils, “from 3-year-olds to mothers,” in 1953.

(Ruth and her sister Phyllis had danced professionally under the name “Adair Sisters”—thus the name of the dance school.) It had three studios, dressing rooms, a kitchen, and an office in the basement and first floor. The Bakken family moved into an apartment on the second floor. Space at the front of the buildingwas rented to a dentist. City records indicate that the dance studio was no longer in the building by 1969.

Danish American Center. The Danish American Fellowship (DAF), organized in 1948, was looking for a permanent home when the building on Cedar Ave. became available. The DAF purchased the building in 1970 and renamed it the “Danish American Center.” The building offered a large hall for membership meetings, parties, and banquets and space for Danish language classes and classes in folk dancing, cooking, genealogy, and crafts. There was also opportunity for rental income from apartment tenants. For a number of years, the organization raised money by conducting Monday-night bingo games. The DAF sold the building when it merged with the Danish Home (Danebo) on West River Parkway in 2006.

American-Nordic Center. Two DAF members, Sheldon and Inge Russell, were the next owners. They loved the idea of a neighborhood center and wanted to continue renting office and meeting space to community organizations such as the Hiawatha Lions and Norwegian Contact Club as well as event space for wedding receptions, birthday parties, and christening celebrations. They called the building the American-Nordic Center. After six years of ownership, the Russells decided to retire from the responsibilities of being landlords.

New Ownership. In July 2012, Dave Bicking, owner of the Powderhorn Garage and a well-known participant in local protest movements, purchased the building in order to rent out office space to activist groups. In particular, he wanted to help three organizations that lost their office rental space in the fire that destroyed Walker Methodist Church in May (Welfare Rights Committee, Communities United Against Police Brutality, and Minnesota Immigrant Rights Action Committee). Women Against Military Madness (WAMM) and Occupy Minneapolis are also among the new tenants. Mr. Bicking hopes that bringing these organizations under one roof will foster communication and cooperative efforts. He plans to live in one of the second floor apartments.