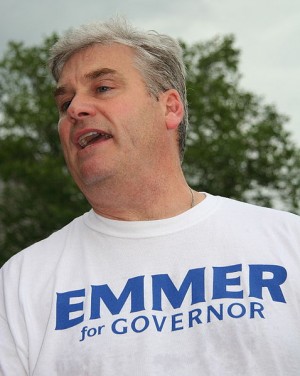 Despite public backlash against Target Corporation’s political donations to a Republican-run independent expenditure committee that is backing GOP-endorsed candidate Tom Emmer for governor, other Minnesota businesses continue to contribute to the very same group, MN Forward.

3M is the latest major contributor to MN Forward, as revealed in a new campaign finance report (PDF) released Wednesday morning. The Minnesota-based corporation added $100,000 to the independent organization on Sept. 10. A number of other business have contributed small amounts to MN Forward since the last campaign finance filing, but a $10,000 donation from Frandsen Financial Corp. is the only other major money transfer besides 3M’s $100,000.

After the group was criticized as solely an extension of the state GOP, MN Forward trumpeted endorsements for a bipartisan slate of down-ballot candidates. However, the new report indicates those other endorsements are a minor part of the group’s operations, with almost all of their attention and money devoted to the Emmer campaign. Over 95 percent of their expenditures on behalf of candidates have been for the gubernatorial race. The group reports spending $300,000 against Democratic candidate Mark Dayton, $344,000 supporting Emmer and only $31,000 on the six other candidates’ races.

Reports for all independent expenditure groups were due Tuesday, yet another Republican independent group’s funding remains a mystery. Minnesota’s Future — an organization run by Republican activist Jeff Larson — purchased in late August an ad buy criticizing Dayton’s tax proposals. The state Campaign and Finance Disclosure Board does not yet have the required form from the organization. However, Tuesday’s reporting deadline was a postmarked date, so the board says the report may not be late and could still be available later Wednesday.

Minnesota’s Future is a relatively new player in the campaign, with no contributions taken in this year before the August primary.