Almost a thousand guests were in attendance at the 25th Philippine Day at the Landmark Center last Sunday. The occasion is organized annually by the Cultural Society of Filipino Americans in collaboration with members and friends of the Filipino community here in Minnesota.

The event was highlighted by the visit of St. Paul Mayor Chris Coleman who gave a warm talk and reiterated the importance of being proud of one’s own ethnic background in a culturally diverse Minnesota. He is the first St. Paul Mayor in Philippine Day’s history to be part of this great Filipino Minnesota experience.

CSFA President, Dr. Ligaya Carlos, recognized Gina Manahan Schrader for having envisioned and founding the Philippine Day in Minnesota. In 1987, during her term as CSFA president, she saw a need for the Filipinos to come together in one huge gathering to celebrate and to be recognized as a united member of the Asian community. Hence, the Philippine Day came into fruition. She was presented a plaque of recognition read by Linda Davis who is the “pillar” and perennial overall coordinator of this affair. 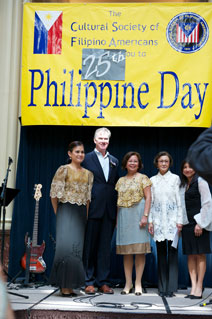 Several of the guests enjoyed delectable food items, including the popular adobo and haluhalo catered by Menali Canlas, Maricel Larazi, Letty Dizon, Lily Lacap and the Filipino American Women’s Network. Some attendees even brought their own containers to be able to purchase food in bulk to take home.

During the program, the various talents of the Filipino community were showcased, which was hosted, by Dr Marither Sangalang and CSFA Board Member, Jean Cruz. The audience enjoyed demonstrations of martial art skills, songs and dances by both the youth and the not so young alike. The CSFA Dance Troupe, led by head choreographer, Gary Paz, featured its collection of PAMANA costumes and also performed colorful Filipino traditional dances, namely the Bulaklakan, Karatong and Tinikling. The last dance is a crowd favorite and considered by many to be the Philippine national dance.

Before the program ended, winners of the Pinoy Shots (CSFA Photo Contest) with “Sunrise” as theme were announced. Winners were Ferdie and Tessie Oconer who bagged the 1st, 2nd and 3rd places and of course, the cash prizes. Judges of this photo contest were Marlina Gonzalez, Karin San Juan and Jeff Leiviska.

The Cultural Society of Filipino Americans is a non profit organization created in 1971 with a mission to preserve, promote, and share valued Filipino customs and traditions through cultural, educational, social and philanthropic activities. Their projects include representation of the Filipinos at the Festival of Nations, Philippine Children’s Camp, Cultural Gap Workshops, Bowling and Volleyball Tournaments, Caroling, PAMANA and the Philippine Day.