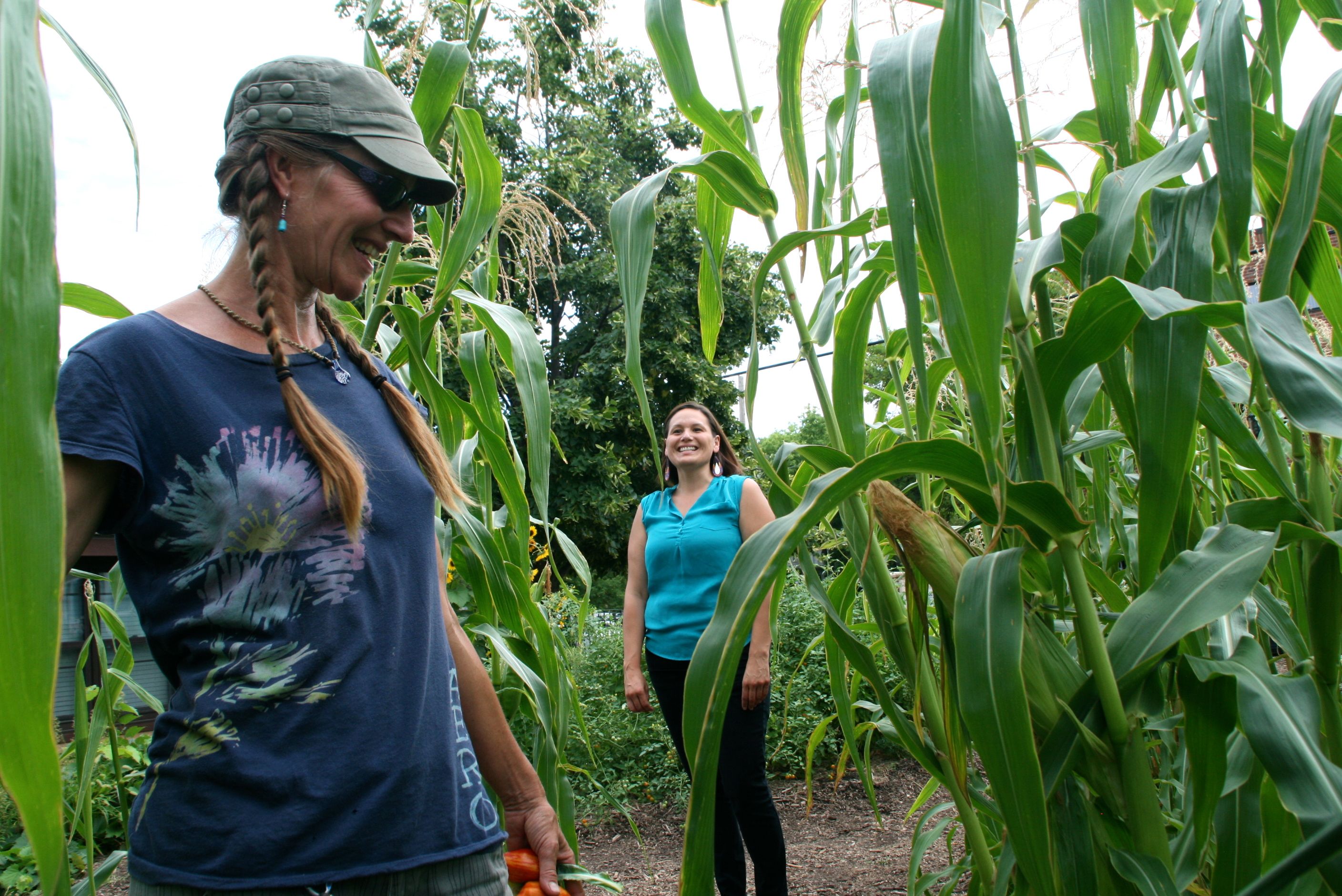 Most community gardens are small rented plots, paid for and maintained by individuals who buy and plant the seeds and put in sweat equity for a small harvest. The 24th Street Urban Farm Coalition’s Medicine Garden (in Ojibwe, Mashkiikii Gitigan), in the Ventura Village neighborhood of Minneapolis, is different. Less a community garden and more a communal garden, it’s a place where members of the mostly American Indian community can come to help maintain, harvest fresh vegetables—sharing work, food, and knowledge.

The garden, has been open since 2011, on a tract of land donated by and across from the Indian Health Board. The mission of the garden expanded this year when Christina Elias, its first farmer (yes, it’s an official title), was hired. Elias has gone beyond the garden’s original mission working, she says, to make this garden a place to come for community, art, spirit and connections to the Earth.

“There’s a spiritual element,” said Elias, “that comes from making the garden beautiful and artistic. You can’t grow food without a spiritual connection.”

In spiritual center of the garden is the Three Sister’s Spiral, a turtle shaped circle of corn, beans and squash plants. “The corn was planted on the full moon of May. The beans fix the nitrogen in the soil, which helps the corn,” she said.

The corn chosen was ordinary sweet corn, but a traditional variety called Oneida corn, from tribes from Wisconsin with origins in what is now New York State, part of a traditional creation story. The ears have only eight rows of oversized kernels, rather than the 22 rows seen on more familiar sweet corn.

“My dream for this year’s garden,” said Elias, “is that the corn will stand until mid-October and then we will get the community involved in the harvest.” The ears are picked by hand, then braided together and hung until dry then boiled with hardwood ash, much like hominy, to separate the kernels from the ears. The most popular ways to serve the corn is in a soup or ground to make cornbread.

She hopes that a shared traditional harvest will help bring members of the Native community together. “But,” she said, “everyone is welcome.”

The sacred spiral makes up only a small part of the garden. By late August, more than 60 pounds of lettuce had been harvested, and those rows have already been replanted with cool weather vegetables to pick in the fall. There are cucumber vines, a mix of greens, herbs, and even flowers, donated by a neighbor who lost a home and didn’t want to see the home’s perennials go to a bank. Stones, from Lake Superior, decorate the sage bed.

The local community has become involved to make the garden a success. The compost soil, 45 tons of it, came from the Shakopee Mdewakanton Sioux Organics Recycling Facility. Volunteers helped shape the beds and moved last year’s surviving woodchips to the new garden, working 11 days before the garden was ready to plant. Neighborhood kids painted the garden’s garbage cans, a particular point of pride. After a couple of picnic tables were vandalized, the garden staff brought in local Native artists to paint them with bright designs. There have been no vandalism problems since.

People come for what they need, like the small intergenerational group who had come to pick and shell the dried-on-the-vine black turtle beans. A group of young children stopped by for a snack of tiny, red cherry tomatoes, picked directly off the vine. “Those are pretty good tomato candies,” Elias said to them. “Better than chips from the store.”

She hopes, she said, that these small connections to the garden will lead to better eating habits and better nutrition for a new generation. “We’re removed from our food sources,” she said. “See—that boy tried to eat a green tomato. It’s not their fault that they are separated from their food sources. We want  people to come by and try fresh food.”

The garden is starting to gain notoriety—the good kind—with a visit this year from a U.S. Undersecretary of Agriculture. The hope is that more members of the American Indian community as well as others living in the neighborhood will get to know the gardens better.

“The goal for next year,” said Lannesse Baker, Environmental Program Manager at the Indian Health Board of Minneapolis, “is to have more people register to do work shifts. We want to do more teaching and make links with the community—links that incorporate food and healthy eating. We eventually want to get more vacant properties for more garden spaces.

“Ideas for the garden started at a community story sharing workshop where we asked for stories that incorporated memories of gardens,” continued Baker. “There were a lot of touching stories, a lot of emotional memories of parents and grandparents.”

“A lot of these kids have been growing up without garden memories, without garden stories.” said Elias. “Now they’ll have some to tell. We are two or three generations away from the earth, but we hope that will change. The garden is more than food. It’s connections.”

Christina Elias (in the hat) along with Lannesse Baker as they walk through the Three Sisters Spiral.

A sign at the front of the garden explains how Oneida corn differs from sweet corn.

In addition to the spiritual spiral the garden produces Mixed greens, cucumbers, tomatoes, herbs, pumpkins and much more.

Katrina Martinex is one of the garden's young caretakers.

Oneida corn as part of the Three Sisters Spiral.

Picnic tables, painted by local artists, were a group effort, with the handprints of 6-year old children.

Rafa DeCastro and Carlos Davila take a taste of some fresh cherry tomatoes.

Sacred corn is the theme of this artist painted picnic table.

The corn spiral is the first thing you see as you enter the garden.

The Three Sisters Spiral welcomes the community to their garden.

Many organizations came together to make the garden possible.