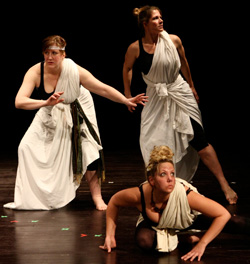 But copyright issues or no, life goes on and so the unveiling of the new overnight plays will be on Saturday, January 14, 2012.

But before the plays can be written, rehearsed and performed all within 24 hours, we need to know what the plays will be about.

So we solicit theater folk for ideas for the “ingredients” for the six ten minute plays which will result.  And so, we ask that you put on your thinking caps and throw some suggestions our way.

The categories are, as always…

(random suggestions from the past include… a garage door opener, a curling iron, ice skates, a sock puppet, a tub of purple pens, a rubber chicken, a bowling trophy)

(random suggestions from the past include… ennui, giddiness, guilt, love, schadenfreude [every year someone suggests schadenfreude, consider it already suggested – hee hee])

– a quote or line of dialogue

(random samples from the past include…

“Nobody expects the Spanish Inquisition!”

“The potato is a noble food.”

“There’s a shortage of perfect breasts in this world. It would be a pity to damage yours.”

“Why does everyone hate me on Wednesdays?”

“I could have sworn that was a fish.”)

– another random element – such as a stage direction, a color, an animal, a particular word, a song, etc.

(randomness of the past includes… a box of doughnuts, the stage direction “Repeat, in miniature,” a character who speaks only in quotes from the film “Casablanca,” an otter, Lot 666)

Suggest something for any or all categories, and post a comment here, or email at mail@matthewaeverett.com (copy to browder268@yahoo.com, just in case my main spam filter is acting wonky).

We’re accepting suggestions through Thanksgiving weekend, Sunday, November 27, 2011.  Then I’ll collect the results and pass them on to the powers that be at Unbound.  They then whittle them down into a manageable bunch for the online ballot.

Ah, the online ballot.  Once the suggestions are compiled, the final ballot of choices will be posted online so that the general public, all of us included of course, can vote for their favorites.  They plan for the voting window to take place during the month of December.

The winning ingredients will be revealed to the writers on the night of the writing, Friday, January 13, 2012.  And off they go…

Thanks, as always, for your twisted imaginations.