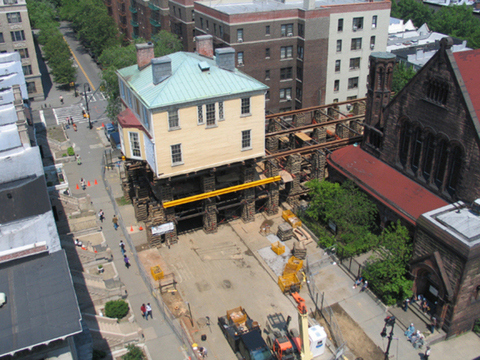 Alexander Hamilton’s “Country House,” built 1802, is lifted to be moved around a church in New York City (2008). (Photo courtesy of http://www.wolfehousebuildingmovers.com)

At the April 16 meeting of the Minneapolis Heritage Preservation Commission (HPC), Anders Christensen and other members of the Healy Project presented evidence supporting their appeal to stop the demolition of the Edward Orth House at 2320 Colfax Avenue, designed and built by master builder Theron Potter Healy in 1893. The HPC received over 200 e-mails regarding the appeal, urging the HPC to declare the house an historic resource; all but one, the owner’s, supported the appeal. The HPC voted 8-2 to grant the appeal. Members of the Healy Project used their Facebook page, “T.P. Healy: King of the Queen Anne,” to muster support. In addition, the campaign to save the house garnered national attention when Nicole Curtis of the cable TV show, “The Rehab Addict” requested that her followers write the HPC in support of the appeal.

At the HPC hearing, John Jepsen of Jepsen, Inc., a house mover, testified that it would be possible to move the house. According to his calculations, the house weighs 180 tons, excluding the foundation. If the house were demolished, those materials would wind up in a landfill. Marian Biehn of the Whittier Alliance suggested that one option to save the house would be to move it to a vacant lot on Stevens Avenue in the Washburn-Fair Oaks Historic District. Jepsen says that if they were to move the house, he would get assistance from house movers in Pennsylvania who specialize in moving large structures up and down hills. This company, in order to move Alexander Hamilton’s house, actually lifted it 40 feet to get past a church which blocked the only route to the new site. (see photo)

Developer Michael Lander proposes demolishing the Edward Orth House to build a four-story apartment building on the site. The owner of the house, Michael Crow, now has the opportunity to appeal the ruling now that the house is an historic resource to the Zoning and Planning Committee of the Minneapolis City Council.