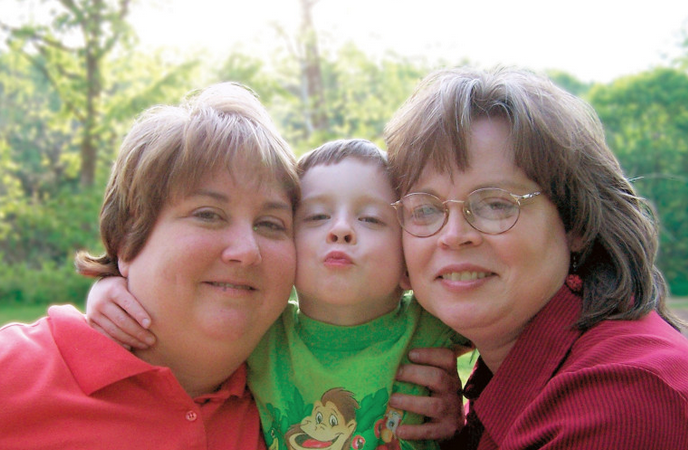 Seems I’ve just been seeing the wrong Christy Marie Kent Fringe shows until now.  Though Kent is an award winning storyteller, her performance style back in 2012 when I was intrigued enough by her preview for Moonshine, Madness and Murder to drop in and see the full show, left me a little underwhelmed.

To be fair, each of her first Fringe shows (both dealing with moonshine and cloistered monks and nuns) were test-driving material for her upcoming novel, so they weren’t meant to be either strictly theatrical in nature, or even ideal presentations as storytelling or spoken word.  Kent decided to use the Fringe as a laboratory to fine-tune her material, and if that’s how she wanted to spend her money, good for her.  For whatever reason, be it subject matter or presentation, it wasn’t really grabbing me, so I sat the next couple of Kent shows out.

“Few people carry around as much baggage as trans folks with wives and kids.”

As luck would have it, I got out just as things probably got interesting.  Kent’s next two Fringe shows began to deal with her own story of transitioning as a transgender woman.  While this year’s low-key Fringe preview of her latest offering, Trans Families, still didn’t grab me, the subject matter of the show did – families in which the father reveals to the family that from birth they’d always felt as if they’d been placed in the wrong body, and so began their transition to living new lives as women.  These weren’t Kent’s own stories, but were nonetheless true stories of other transgender people and their families transforming as identities shifted.  Kent is collecting these tales for a non-fiction book about transitioning parents with children.

The thing that got me in the door to see Trans Families was the addition to the cast of Erica Fields reading the role of Danielle, a trucker and father who risks losing everything, including his marriage and family, in order to be true to she really was.  (In the interests of full disclosure, Fields performed the role of the transgender minister in the Minnesota premiere of my play But Not For Love a few years back.  That’s how I know what a good actress she is, and she brought that same vitality and talent to liven up Trans Families.)

Kent read the role of Jamie, formerly Jimmy, who adopted a child prior to transitioning, and also found herself on the verge of losing her wife and family on the journey to finding herself.  Kent’s soft-spoken delivery works in the context of the larger show in a way it didn’t quite land in the preview.  Her acting chops, though still a work in progress, have improved since I saw her last.

“You might have been Daniel at one time, but all I see is Danielle.”

The church, the law and extended family all apply pressure in the stories of Danielle and Jamie, fueling intolerance that drives both women to the brink of suicide.  But since they’re alive to tell the tale, you know that some twist of fortune reels them back in again.  Life is persistent, and full of surprises.

“Laurie’s much prettier than Larry ever was handsome.”

Director Janet Preus also took a role in the proceedings, that of Lily, an affluent stay at home mom who thinks she has the perfect life, until her husband Larry tells her a secret he’s been struggling with his whole life: he feels he should have been born a girl.  Lily sticks by Larry during his transition to becoming Laurie.  But the family is thrown for another loop when Lily is diagnosed with cancer.  Preus gives us a nice peek behind the curtain of this marriage, without dissolving in the melodrama that I’m sure would be a tempting choice under the circumstances.  The light touch is appreciated.

Trans Families is simply staged reader’s theater in many ways.  No music stands, but each of the performers has one of three matching writing journals holding their text.  Their stories alternate and both Kent and Preus, in their roles as writer and director, have crafted the script in such a way that the stories each build and reflect off one another in illuminating ways.  Preus’ staging also smartly breaks up and shifts the stage picture these three women present so it doesn’t end up feeling static.

“Divorce and bitterness and anger are so powerful.  But they pass.”

Though the details of transgender stories are always different, many of the milestones are the same.  Transitioning parents have an additional set of commonalities they share.  Lily represents the kind of spouse I’m sure Jamie and Danielle wish they had.  And it’s useful to hear the flipside of the transgender journey when that person is already married to someone – how that spouse must feel when their own world tilts on its axis in a way they’d never expected.

“This is not what I signed up for.”

Even presented without frills, there’s something about true stories that can be very powerful.  That’s the draw, and the payoff, with Trans Families.