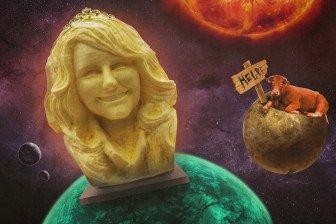 Tweet Review – Confessions Of A Butter Princess – People turning into butter, talking cows – I liked it but I’m still not sure why – 3 stars

“You’re overthinking it,” my mother assured me.  We’d both just seen Little Lifeboats’ Fringe show Confessions Of A Butter Princess, or Why The Cow Jumped Over The Moon.  I had them on my Top 10 list this year because I really admire the work this company does, particularly with new plays.  And their in-house playwright (also the playwright here on Confessions) Abby Swafford serves up comedy in mind-bending ways I find fascinating and engaging (see Parhelion or Raise Your Voice (Suzanne Cross), or That F**king Harriet Tubman Play as examples).

“That cat and that fiddle were not innocents!”

I was apparently psyching myself out on Butter Princess.  Mom had no such problem.  “You’re looking for more here when there probably isn’t any.  It’s just a goofy Fringe show about a queen (Erin Denman) on another planet who’s being pursued by three young butter princesses (Alana Horton, Briana Patnode, and Madelyne Riley) who actually turn into butter, and there’s a talking cow (Hector Edwardo Chavarria) she helps to set free.  That’s it.  Just enjoy it for the strange little thing that it is.”

Good advice.  Since, as a non-native Minnesota transplant, I have trouble understanding the whole butter princess tradition at the state fair anyway, it might as well be some alien ritual set on another planet (though, it does seem as if there is at least a suggested relationship to the Minnesota origins of the whole thing – it’s just that when these young ladies win the crown, they also win a one way trip into space.)

Chavarria is a real scene stealer as the flamboyant cow (and I’m not just saying that because he flirted with me – and so many others – in the audience).  (In a nod to the whole “Cecil the Lion” controversy, the cow also wondered aloud if a less friendly looking man in the audience liked to hunt – “Are you a dentist?”)

“You tried to kill me once.”
“Trust is a fickle thing.”

Director Chris Garza and his cast embrace the weirdness of the script and create this strange little world of butter princess revolution.  The final transformation of the princesses into butter was a delightfully creepy bit of costuming magic from producer Victoria Pyan.  The princesses just get more progressively yellow until finally we have them all in blond wigs, creamy bright yellow suit jackets, gloves, and unnerving blank masks, also in bright yellow.  It’s a very vivid final image for them.

“Dearest cow, does the unending blackness scare you?”

So I’ll take mom’s advice and just relax.  Confessions of a Butter Princess was just supposed to be a lark.  And so it is.