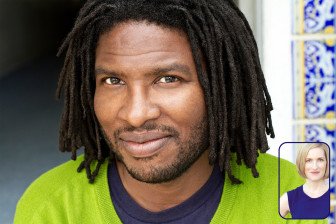 Even though Les Kurkendaal lives in California, it feels like it wouldn’t be a complete Minnesota Fringe Festival without him on the schedule.  We’re lucky the lottery ping pong balls roll out in his favor, and that he loves our Fringe so much that he just keeps coming back.  He’s also a reliable favorite for my Mom each year.

“Lil Wayne, I just want to let you know I love your work.”

But after seeing so many Fringe shows with so many stories from different corners of Les’ life – like the time his white boyfriend took him home to meet the family for Christmas, but didn’t mention ahead of time that Les was black; or the time his boyfriend took Les to his high school reunion, but neglected to inform his classmates ahead of time that he was gay; Les’ coming out story and the difficulties it posed in his relationship with his father; alcoholism; body issues; Les’ mother’s dementia and memory loss – after seeing all that, what other stories could Les have up his sleeve?

“I’m a New Yorker.  I can have an orgasm and a minor medical emergency at the same time.”

Seems Les was wondering about that himself – hence, his new show Coffee, Tea or Me, an existential crisis (which as Fringe Executive Director Jeff Larson rightly quipped during the traveling artists preview showcase the night before Fringe opened, would be a horrible title for a show, if it were done by anyone but Les Kurkendaal).

I honestly wasn’t sure going in whether I was going to take to this show.  The premise seemed to be that Les was doing a show about the fact that he didn’t have an idea for a show.  That meta “struggles of the artist” thing normally is the exact opposite of the sort of thing I find entertaining.  Also, to switch things up, Les is sharing the stage with another storyteller with a very different way of telling stories, Marlene Nichols.  Les and Marlene alternate telling their stories and the framework establishes that Les, on a road trip from California to Minnesota, trying to shake off the malaise he’s found himself in, decides to save himself from the endless repetitive drone of Top 40 radio by tuning in to NPR, finding it on the dial as he crosses into each new state.  Marlene is the voice and storytelling of NPR.  Les is, well, Les.

“Like La Boheme.  Minus the consumption.  Also the hot boyfriend.”

Les is reminded on his journey of what got him into acting in the first place, of his very first Fringe show (in a country on the other side of the world), of a friend’s near death experience and the party of friends that saved him, and finds himself not the target of prejudice at a questionable truck stop but the one unexpectedly dishing it out to others.  Meanwhile on NPR, Marlene – quite often appearing in a fabulous gown of some sort – regales us with stories tailor-made for the kind of NPR listener that lives on the fortunate side of the white privilege divide (not that there’s anything wrong with that).  There’s a tale of a young woman living on her own for the first time, in Paris, with a limited grasp of the language.  There’s a meditation on how the romantic ideals of a five year old do – and don’t – change as she searches for Prince Charming in a modern day world of ordinary men.  And, going a more familiar, Les Kurkendaal sort of route, there’s a portrait of a colorful mother, and the often exasperated daughter who needs to make her peace with her.

“Les Kurkendaal takes a Pound in the rear.”

Kurkendaal and Nichols in some ways have very different styles of storytelling, but the NPR conceit nicely ties them together.  The interludes with Nichols give Les and the audience a contemplative break from the road trip, and let the mind fire on slightly different cylinders for a while.  It’s interesting to experience those two different energies playing off each other.  We feel as if we get a portrait of Marlene inside a portrait of Les.  It also gives us just a slightly larger picture of the world than Les alone might be able to offer.  This is an apt strategy.  While many of Les’ stories focus in on a small cast of characters, Coffee Tea or Me seems to be focused more outside of Les, on the larger world around him, which he’s traveling through, and in which he’s trying to find his place.

“I’ll try to get you through menopause, but after that I’m out.”

Coffee Tea or Me is a simple but intriguing experiment with Les’ standard Fringe storytelling format, and it pays off.