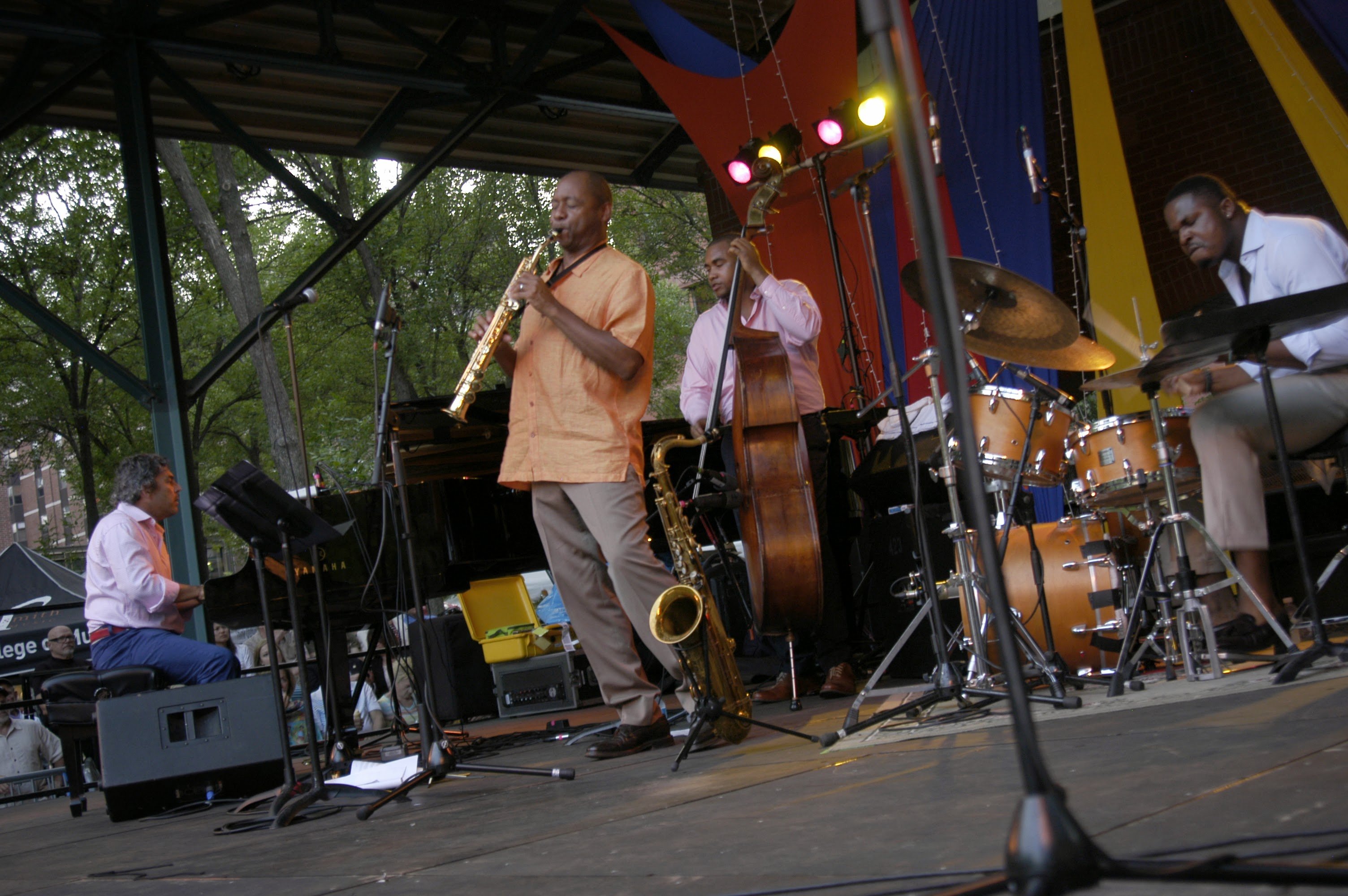 “I’m glad we didn’t go to the park. We’re stuck in here together,” Dianne Reeves said at the end of her scorching hot set inside the Amsterdam Bar and Hall on Saturday night, June 28, to close the 16th annual Twin Cities Jazz Festival in St.Paul. It’s estimated that 20,000 attended the free festivities taking place at various outdoor and indoor locations.

With the rain on Saturday came a change of venue for the Reeves concert, from outdoor to indoor, but despite all that, it turned out to be a good thing. A very good thing.

For two hours, the standing room only crowd was throughly entertained by not only a peerless world-class vocalist, but by her first-rate all-star band including Geoffrey Keezer on piano and keyboards, Reginald Veal on bass, Terreon Gully on drums, and Romero Lubambo on guitars.

Not even lost luggage, or drumsticks could have spoiled the mood. Reeves was casually dressed in white jeans, and barefoot, seemed totally relaxed as she said she felt as though she was standing in her living room. Indeed, the intimacy of the setting helped enhance the laid-back vibe, so everything just seemed to click.

In fact, that could be one of the overriding themes of this three-day festival on June 26-28–Everything clicked.

Before Reeves took the stage, saxophonist Melissa Aldana and her band the Crash Trio including bassist Pablo Menares, and drummer Francisco Mela performed in front of an enthusiastic crowd at the Amsterdam.

After witnessing the Santiago, Chile native in action, I can see why she recently made history by becoming the first woman instrumentalist to win any of the Thelonious Monk Institute of Jazz top honors. She displayed a level of professionalism and poise that very much resembled a seasoned veteran. And the band interplay was so good that it’s surprising to know that they’ve only been a band for two years. It does help that they knew each other well before becoming an ensemble. The music definitely benefitted from that relationship.

Aldana and crew played songs mostly from its self-titled Concord Records album, and even one that Aldana had just written entitled, “Back Home.” The band sounded particularly stellar on Monk’s “Reflections.” Midway though the set, a gentleman sitting next to me leaned over and whispered that he thought he heard echoes of saxophonist Stan Getz.

In the end, the band received a much deserved standing ovation. Immediately following the set, a long line of supporters hovered near the front stage to get Aldana to sign CDs, which she did graciously.

But let me get back to Reeves for a moment.

The band performed several songs from her new Concord Records album, Beautiful Life, among other tunes. Reeves scatted, danced, and enjoyed a lot of call and response with the crowd that included a large number of Black females, which is seldom seen at jazz concerts.

When the band opened with their wondrous arrangement of “Summertime,” something told me that this would be a night to remember. The level of musical craftsmanship was so extremely high that its nearly unexplainable. Keezer played the piano strings with exceptional flair, Gully revealed his masterful use of mallets, Veal on electric bass and vocals created intense rhythms, and Lubambo on guitar formed an unbreakable strong bond with Reeves, particularly during the duet, “Our Love is Here to Stay.”

“Tango” was another highpoint of the set. Reeves growled the lyrics as the crowd looked as though it was stuck in a trance. The pace and tempo was upbeat, and Lubambo’s solo here, along with Keezer’s solo, visibly pleased her and the attentive audience that even included a few little children dancing in front of the stage.

“Cold,” a song written by Gully, Reeves, and pianist Peter Martin, also stood out with
lyrics, Got My Swag on now/I Wish You Peace and Happiness/I’m Better Without You/Getting My Life back, My Swag. It’s modern grooves had a timeless quality to them.

The band brought the house down with their rendition of Marvin Gaye’s “I Want You,” which appears on Beautiful Life. Wiping sweat off her brow, she talked to the music and the music talked back.

Reeves improvised lyrics about how she discovered vinyl and the stories about the musicians on the back of albums, and basement parties where red lights shined brightly. She also acknowledged the passing of singer Bobby Womack, as the sad news was reported on Saturday. Plus, Reeves mentioned singers Curtis Mayfield, who she said “brought us together,” and Marvin Gaye who, “made you say things, and act on things.” Along with the crowd, she sang a bit, Diamond in the Back/Sunroof Top/Diggin the Scene/With a Gangsta Lean.

Reeves, voice still as powerful and flawless as ever, sang Summers Still Here/I’m Still Waiting/Winters Here/I’m Still Waiting, lyrics to the Bob Marley song, “Waiting in Vein,” which only added to her skillful art of handling a lyric with storytelling expertise. Did I mention the day before she had just performed at the big Montreal Jazz Festival?

After the encore, “Better Days,” which served as another sort of sing-along, Reeves wrapped up her set with words of encouragement for the festival-goers, saying, “Tell your stories. They are the fabric of our family.”

Just the night before, at Mears Park on Friday, saxophonist Branford Marsalis told his own story and added to that musical fabric, a music loving crowd, enjoying music made by a musician from one of the most beloved jazz families of all. His ability to accurately interpret different musical styles was on full display.

Yet, from the start, Marsalis let his band stretch out. And they took full advantage of the opportunity. Long-time pianist Joey Calderazzo was on fire from start to finish. He even had to stand-up while he played a few times. Young up-and-coming rising stars bassist Russell Hall, and drummer Justin Faulkner had no problem keeping up the pace with Marsalis who switched back and forth from soprano to tenor sax.

During the opener, “The Mighty Sword,” there were plenty of smiles, and not just from the faces of the band members, but on the faces of festival-goers who crammed into the park with their colorful folding chairs, families, and friends in tow.

As for me, opting to find a seat out front, I wished I had brought my own. I ended up sharing a chair with festival-goer Michael Johnson who, when ask what brought him out to the festival, confessed, “It was free.”

Through out an exciting extended version of the standard, “Cheek to Cheek,” Johnson said, “Boy, they are serious. Look at them! Their sweating through their shirts!” Faulkner’s press rolls would have pleased the band’s long-time drummer, the great Jeff “Tain” Watts, not to mention, the late master drummer and bandleader Art Blakey. That’s ditto for Faulkner’s roar on Monk’s “52nd Street Theme.” Ellington’s “In a Mellow Tone,” played extra slow, was also expertly rendered by all. Hall’s solo here stood out. People in the audience watched in awe and some even pretended to play keys on their thighs.

Johnson, revealing a bit of his hidden musical knowledge, mentioned at least once that Calderazzo sounded a little like pianist Chick Corea.

The encore, “St. James Infirmary,” featured Marsalis student saxophonist Tyler Anderson, who joined the band and proved that he could hold his own.

That also goes for the set of percussionist Babatunde Lea who also performed on Friday. His African rhythms and Caribbean vibe had the crowd swaying to the music. On Saturday, stormy weather prevented festival-goers from enjoying the sounds of drummer Kevin Washington, which was disappointing, however people can check him out with his band at the Dakota on August 1.

Again, in the end, everything just seemed to click. The bands, the music, the audience.
Deep bow to all the musicians and the festival organizers this year. And a special thank you to Michael Johnson for sharing his enthusiasm for the music and his seat with me.

Dianne Reeves during her electrifying performance at the Amsterdam