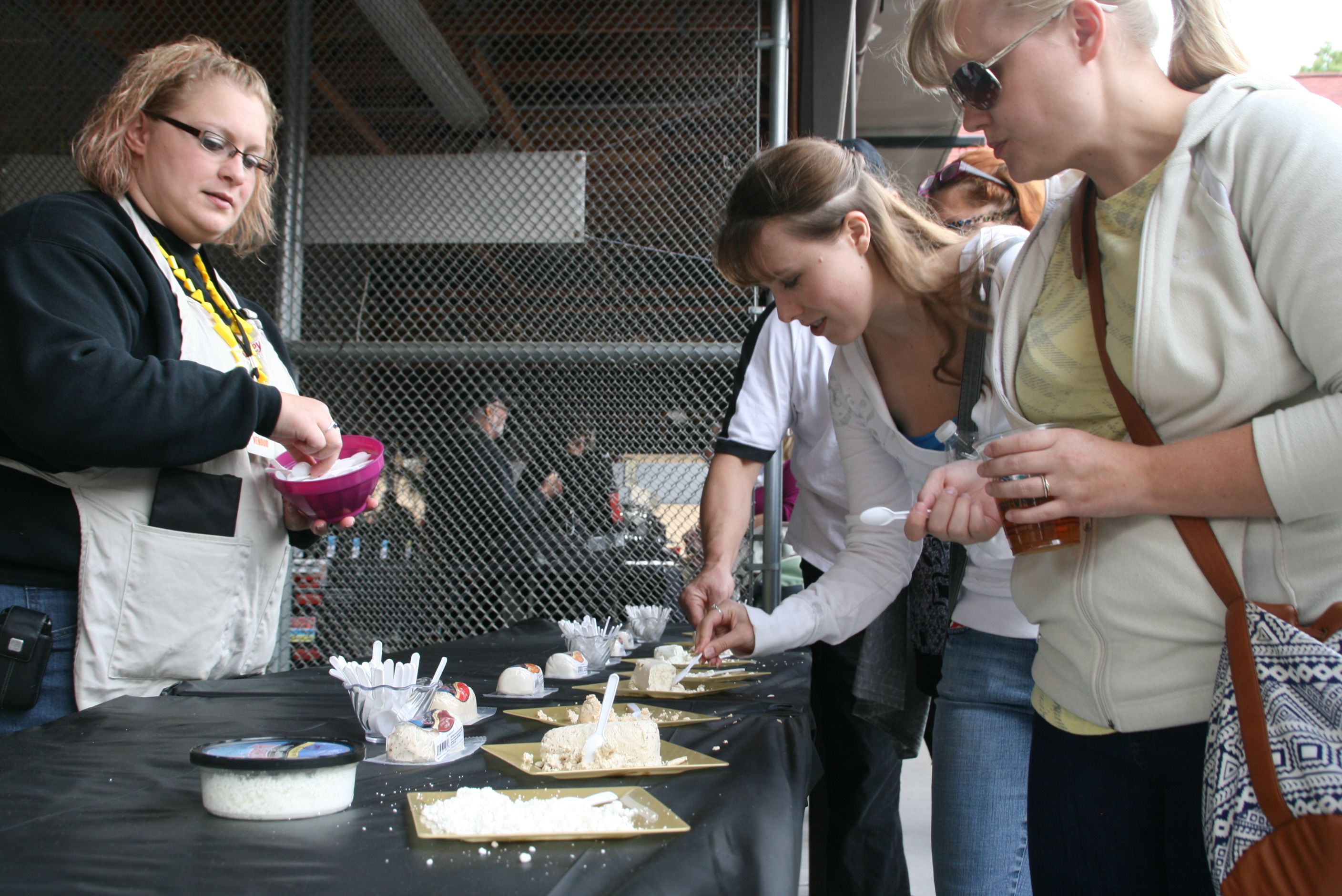 If you love cheese—and who doesn’t?—the place to be on September 14 and 15 was the International Bazaar at the Minnesota State Fairgrounds. A $15 ticket could get you access to the Minnesota Cheese Festival, with more than 40 vendors ready to give out samples and talk cheese. The vendors were all from the Upper Midwest, most from Minnesota. If you missed it, don’t despair: another Minnesota Cheese Festival is planned for sometime in the spring.

The brains behind the Minnesota Cheese Festival, now in its second year, is Whitney McChane, a professional marketing and event coordinator.

“My husband and I really love cheese,” she said. “We went to a cheese festival in Wisconsin for our anniversary and I thought, ‘We have these incredible Minnesota cheeses. People know about Wisconsin’s cheese reputation, but our cheeses are just as good.’ That’s not just my opinion. We’ve got the national and international awards to prove it. Wisconsin had a lot of festivals and we didn’t have any, so I started organizing.”

Last year’s festival, she admits, was chaotic. Most of the 3,500 ticket holders arrived at the same time, early during one-day festival. Vendors were overwhelmed and the lines for samples were long. This year, McChane limited the attendance to 2,000 and stretched the event over two days. “I went after the serious foodies this year. We haven’t made any money yet,” she admitted, “but that’s not the point. It’s not about the money, it’s about the experience.” In addition to cheese, artisans brought samples of their butter, syrups, sausage, breads jams, soft drinks and beer for tasting.

Keith Adams, cheese maker at Alemar Cheese Company near Mankato, sells soft ripened artisan cheeses made from what he calls “the best milk in Minnesota” (Cedar Summit). As he hands out samples, he talks the talk of a true believer in cheeses. His newest creation is the Surly Bender Beer-Washed Good Thunder, a smoky, medium-strong, fragrant soft cheese with a distinctive orange rind. It’s a hit with tasters and he sells a lot of it. Alemar also produces other cheeses: Bent River, a Camembert style that has been getting rave reviews; and a lovely fromage blanc.

Adams’s two daughters work alongside their dad. Alemar, the company name, is a combination of their names, Alex and Mari, and they are enthusiastic about what they produce. They talk up the cheese and answer questions as they hand out samples. “There’s no shame in being cheesy,” says one.

Adams started making cheese as part of his mid-life crisis, about five years ago. He was a banker when he started thinking about making cheese. “I have friends in Northern California who are winemakers, and I liked their lifestyle,” he says. Since then, he’s gone national: Alemar cheeses are available at most local supermarket chains and co-ops and in cheese specialty shops in New York City, San Francisco, St. Louis, Chicago, and beyond.

Across the Bazaar, in another booth, Marieke Penterman is happy to tell you about her Gouda. She’s a new cheese maker and a new American. Her husband Rolf moved to Wisconsin from Holland in 2002. “My husband wanted to have a dairy farm. Farms in Holland are small, and he wanted to expand,” she said. “I followed a year and a half later. I wanted to start a business before I turned 30. Just a few days before my 30th birthday, I started Holland’s Family Cheese.” She got her Wisconsin cheese-making license after studying cheese making back home in Holland. (Wisconsin is the only state to require cheese makers to be licensed in order to make cheese for retail consumption.)

Penterman specializes in Marieke Goudas, available in 14 styles, including an award-winning black pepper (refined and flavorful with a touch of coriander and onion) and an award-winning fenugreek (hints of maple syrup). Both are made with raw milk poured directly into the processing vat from the day’s first milking.

“Our first year, we made only 18,000 pounds of cheese,” she said. As the popularity and prestige of their cheese grew and they began to sell nationwide, they moved to a larger facility, 100 acres close to Thorp, Wisconsin. She now produces 130,000 pounds of cheese a year, sometimes making up to 800 pounds of Gouda cheese a day.

Raised on a dairy farm near Brooten, Minnesota, former 4-H member and a 2006 Princess Kay of the Milky Way finalist, Alise Sjostrom decided at the age of 16 that the family would make cheese. Her teenage dream is now Redhead Creamery, but Sjostrom hasn’t stopped dreaming. She wants to expand, financed in part through a Kickstarter project.

Sjostrom hopes the money raised will help build a new cheese facility on the farm and to help the family gain equity in the business in order to pass it down to the next generation. She says she hopes Readhead Creamery can expand their small line of aged cheddar cheeses. “We don’t have an artisan variety of cheddar in Minnesota,” she says. With new plant we could make a great artesian cheddar.”

With a week to go, pledges from 450 cheese loves passed the original $35,000 goal and is still growing. The campaign will cover only about 10 percent of the costs, but plans to construct a building with a room to make the cheese, a viewing area, and cheese caves are in sight.

Part of the Redhead dream is to keep the operation powered by renewable energy. Six years ago, the farm invested in an expensive anaerobic digester, not usually seen in smaller farms, which can turn manure (and maybe whey) into power for their farm.

So people would know where their food comes from, the Redheads brought a registered four-day-old Holstein bull calf named Buddy, two sheep, and a goat to the Cheese Festival. The goat, said Linda Jennissen—Alise’s mother—didn’t have a name, but they were running a goat-naming contest. By Tuesday, a final winner had not yet not been chosen, but the three finalists were Chevy, Billy Jean, and Cleetus.

Award-winning blue cheese has a kick

Lining up to try new cheeses

Marieke Penterman moved from Holland to Wisconsin to make Gouda

Soft, grilled samples of cheese were popular with the crowd

A goat with no name