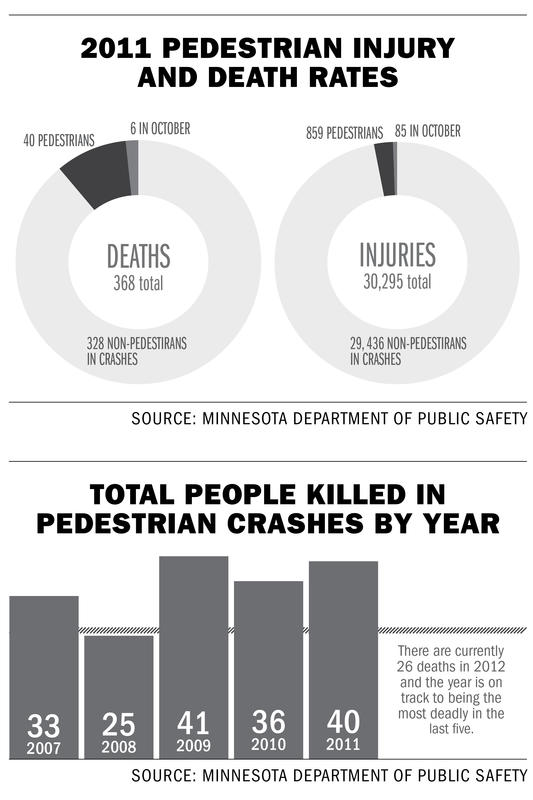 As October is typically the most hazardous month for pedestrians in Minnesota, the Minnesota Department of Transportation and other groups are aiming to prevent accidents.

MnDOT launched their safety campaign “Share the Road” in late September. The campaign works with partners statewide, like the University of Minnesota, to get people to pay attention while walking.

One pedestrian fatality has been reported so far in October out of the more than two dozen on record this year, said Nathan Bowie, a spokesman for the Minnesota Department of Public Safety.

Bowie said 2012 is on track to be the state’s deadliest in the last five years.

October is typically the most dangerous month because dusk arrives earlier and mornings become darker, which is why it’s a “focus month” for preventing accidents between walkers and motorists, Bowie said.

“The big factor is visibility,” he said. “The days are getting shorter around this time of year, and it’s about adjusting to the dark.”

Bowie said another theory is “school is in session, and campuses are fully active.”

MnDOT data shows a five-person increase in pedestrian deaths since this time last year. The rising trend is getting attention statewide.

“Year after year, we see the number of highway crashes go down, but the number of pedestrian incidents not showing any huge improvement,” Wiens said.

“It’s something that hasn’t got a lot of attention in the past, but it’s time we address those concerns,” she said.

October will be “highlighted” with more aggressive advertising, followed by November and December as roads are icy and pedestrian fatalities are still high.

“Don’t assume cars will stop,” said University police Deputy Chief Chuck Miner. “It’s all about making eye contact with drivers and not being oblivious with distractions.”

Miner said incidents like this weekend’s crash in Stadium Village prove that it’s a relevant and timely issue on campus.

A drunk driver hit six pedestrians that suffered from non-life-threatening injuries — five of which were University students.

“When students are out-and-about going to class, biking or walking, they need to be aware of their surroundings,” Miner said.

The University has implemented safety measures like “high-tech beeping noises that tell people when to walk or not walk” around campus to eliminate accidents, he said.

“Not every crosswalk has them, but that’s the direction it’s moving,” Miner said.

Crosswalks and sidewalks have been added in areas affected by the Central Corridor light-rail construction so students have an easier time getting to class, he said.

Other groups are working on reducing pedestrian accidents throughout the city.

“The top idea is narrowing the time pedestrians spend in the street,” said Shaun Murphy, city of Minneapolis Bicycle and Pedestrian Coordinator.

Murphy works closely with the Pedestrian Advisory Committee, a group of 15 Minneapolis residents and business owners who advise the mayor and the City Council on how to make streets in Minneapolis “walk-friendly.”

The committee’s current projects include the construction of Riverside Avenue, where crossings are being built narrower, and the intersection of Washington Avenue South and Cedar Avenue — a place historically marked with a high amount of pedestrian incidents, Murphy said.

“Take [your] ear buds out, put away your phone and look around,” Wiens said. “It’s about getting rid of distractions on both ends — drivers and pedestrians.”