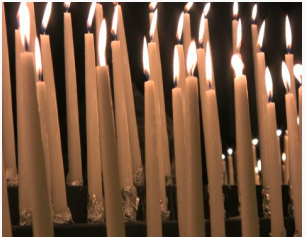 Every year, homeless mothers, fathers and children suffer on the cold streets of Minneapolis in Minnesota. Some of them die. They are often alone and their friends and family have no way to honor their memory. Every winter, Simpson United Methodist Church and shelter gives them a voice. They’ve been doing that for the last 28 years.

In the bitter wind and cold Thursday evening, over 200 Minnesota residents held a vigil and march that began downtown at the Hennepin County Government Center and ended at Simpson United Methodist Church. There, they silently filed into the church to hear the names of those who died while living on the streets all over Minnesota.

The oldest was a man in his 80s. The youngest was 42 days old, a baby named Rose.

Musicians played and candles were lit to honor their memory.

Homelessness has increased at an alarming rate since the economic recession began. A 2009 survey found nearly 10,000 people living on Minnesota streets in 2009 — many of them children and teens. The number is believed to have risen since then. Although numbers from the most recent survey won’t be available until next spring, a preliminary report estimated that 1,000 more Minnesota children became homeless this year in the state’s three largest cities, and that the number of families seeking shelter in Hennepin County increased by 17 percent.

Brian Bozeman, director of the shelter said this is a way for loved ones to honor the memory of friend or family member.

“I personally believe that this service brings an end for a lot of individuals. A lot of people on that list formerly homeless and homeless didn’t have a proper memorial or burial. This kind of brings closure for individuals who knew these folks and have a chance to express themselves and be able to let them go,” said Bozeman.

A lot of victims struggle with chemical dependency or mental illness. Both of which makes life on the street especially cruel.

The Homeless memorial began in 1984 when a frequent guest at the Simpson homeless shelter was found dead after being beaten to death. His name was Eric, a Vietnam veteran.

Over 250 names were read at the service this year from cities across the state.