Katie Miron of Hugo is the newly crowned 57th Princess Kay of the Milky Way.

Katie Miron’s down-filled jacket was a far cry from the evening gown she wore just hours earlier when she was named the 57th Princess Kay of the Milky Way. Sitting in a rotating glass cooler for eight hours in the Dairy Building at the Minnesota State Fair, Katie was having her likeness carved into a 90-pound block of butter.

Her nose was red and she clasped her mitten hands together in the 40-degree temperature, but Katie was having fun greeting the crowd of fans watching sculptor Linda Christensen shape her head in butter.

Christensen, who has been carving princesses for 39 years, said the refrigerated cooler rotates for a reason. “It’s to get all the views of the ‘butter heads,'” she said.

Thursday’s Opening Day tradition of carving the newly crowned Princess Kay has been a must-see since 1965. Before that, from 1898 until 1927, various butter sculptures were featured at the State Fair. The butter sculpting booth is sponsored by the Midwest Diary Association through its nearly 5,000 dairy farms. The eleven dairy princess finalists will have their likeness whittled in butter by Christensen over the course of the fair.

All in the Family

Tradition also runs throughout Katie’s family, who own the Miron Farm in Hugo. In 2007, Katie’s sister Ann was crowned Princess Kay, only the second time sisters have won since the competition began in 1954. Ann said her college roommate, 2008’s Princess Kay Kristy Mussman, is marrying brother Paul Miron in November. Paul milks dairy cows on the family farm.

As parents of six, Fran and Mary Ann Miron now have two daughters and a future daughter-in-law all Princess Kays of the Milky Way. Three of their children, Ann, Katie, and Michael, have been state FFA officers. Michael teaches agriculture at Forest Lake high school and is a state FFA advisor. When not tending to his farm, Fran is the Mayor of Hugo.

The Miron Farm has been in the family since 1887 and was designated a Century Farm in 1987 by the State Fair and the Minnesota Farm Bureau Century Farm Program.

Katie, a 19-year-old college student at the University of Minnesota, represents Washington County. She will be a “good-will” ambassador for the Dairy Association and make public appearances for the next year. She left her enclosed cooler only to run to the 2 p.m. State Fair parade with other princesses, returning for further carving.

“I am very excited for Katie,” said Ann. “She has an energetic personality and she can really relate to everyone. She makes friends right away and she will be meeting all these people.”

Princess Kay candidates are judged on their general knowledge of the dairy industry, communication skills, personality, and enthusiasm for dairy promotion.

Ann said she gave some pointers to sister Katie before the competition. “But there are no guarantees,” said Katie. “They pick the best person to win to represent the dairy industry and your family. All were extremely qualified and any one of them could have won.”

Last Saturday, Ann married her high school sweetheart Brian Tauzell, whom she met in FFA and with whom she attended the University of Minnesota. Katie said she has no plans on getting married any time soon. “Princess Kay can’t get married. We are princesses,” she said with a smile that was soon to be frozen…in butter.

Butter Sculptures are from 9:30 a.m. until 5 p.m. daily in the Dairy Building on the corner of Judson and Underwood. 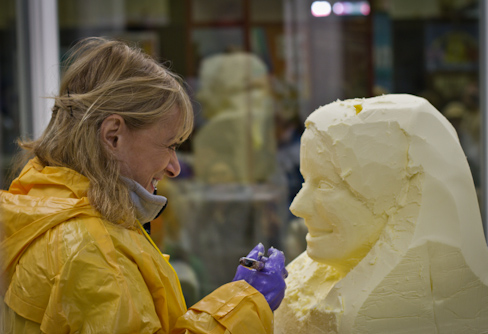 (Above) Sculptor and artist Linda Christensen carves the likeness of newly crowned Princess Kay Katie Miron into a 90-pound slap of butter. This is Christensen’s 39th year creating images of the Dairy Industry royalty. (Photos by Jeff Rutherford). 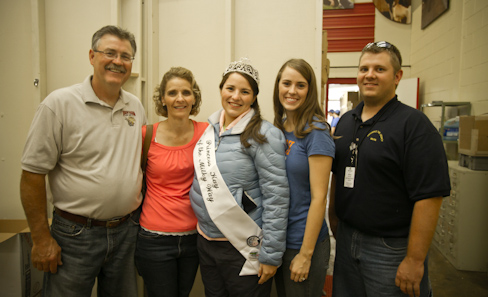 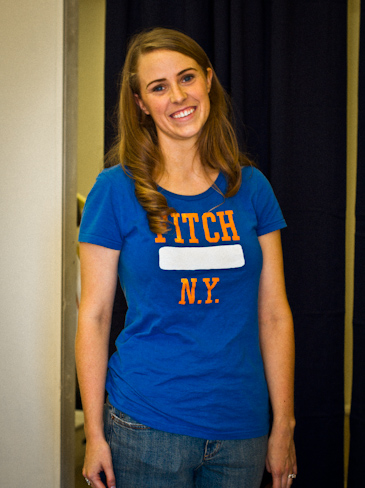 (Above) Ann Miron Tauzell, Princess Kay in 2007, was married the weekend before sister Katie was crowned Princess Kay. Only twice have sisters won the title of Princess Kay. Ann’s roommate in college, the 2008 Princess Kay, is marrying brother Paul in November. 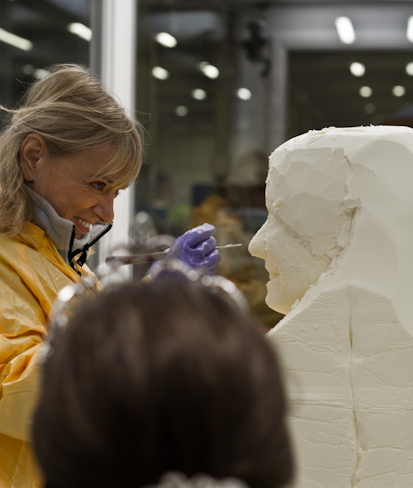 (Above) Sculptor Linda Christensen gets Princess Kay Katie Miron’s nose just right as Katie looks on. The butter used for the ‘butter heads’ is Grade A butter produced exclusively for the Milky Way carving by Associated Milk Producers, Inc. in New Ulm. Christensen will carve all 12 princesses over the course of the fair. Each likeness takes 6 to 8 hours in a rotaing 40 degree cooler.