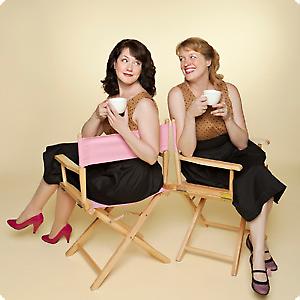 Two gals, one stage, many laughs.

I, Sugar, take you, Cream, to be my lawfully wedding condiment. To swirl and blend with, in paper cups, in porcelain; in hottness and with ice; in cube form or granulated, in packets or by scoops. Forgiving all other additions (even liquers), I promise to stay true. ‘Til final swig do we part. Amen.

2 Sugars, Room for Cream is a fun and occasionally touching performance made up of vignettes that follow the lives of recurring characters (a double-shot of sisters, coworkers, friends) and introduce single-shot solos to the mix. Coffee, wine, whiskey, and coffee again is the common thread between the characters. It was easy to relate to the introductions and stories; haven’t we all asked “pass the sugar, please?” at the proverbial coffee pot? Duos meet over coffee at their aunt’s funeral, a high school reunion, a diner, and the office water cooler. They move into old living rooms, parking lots, and bedrooms with a lil’ liquor. And the vignettes wrap with coffee during the “morning afters” and family familiar kitchens.
Written and performed by Carolyn Pool and Shanan Custer, the vignettes are enhanced by a varied and truly fine soundtrack by Eric Webster, a few original lyrics/songs by Shanan Custer and director Peter Moore. This play was a Minnesota Fringe Festival success and moved easily to the “big” stage.
Veteran performers Custer and Pool breeze through the collection of skits, never missing a beat with multiple character and wardrobe changes (artfully crafted and cleverly simple). The chemistry between the actresses is comforting, almost sister-like. (Having four sisters of my own, I sensitively state that a few degrees of sister-angst was missing.) It was easy to like each character for exactly who they are, be it a neurotic sister, an overwhelmed new mom, an exasperated 20-something career gal, or a well-meaning, but egotistical, burned-out professor. The dialog was spot on for each character, including a favorite line shared over coffee between two strangers when one forces the other to admit that she’s not reading philosophy, but actually the tween sensation Twilight: “Twilight is 50 Shades of Grey for the Justin Bieber set.”
The performance is organized well. Few stage props serve as multiple backdrops from subway cars to funeral homes (really!), high school parking lots to career gal bedrooms. Although the base outfits of the characters remain the same, hats, jackets, shoes, and accessories guide the audience to understand which characters are being reintroduced. The only awkward stagings were when the characters stood at the far opposite corners for either reflective dialog or song solos. It’s true that the actors use up the stage well, but the theater is too small to handle that much space (in my opinion) and the audience has a bit of a “ping-pong” moment glancing back and forth to catch the nuances of each character.
2 Sugars, Room for Cream is described by the producers as: “Scenes from life. Stuff we think is funny” and runs through November 11 at the New Century Theatre, a Hennepin Theatre Trust stage located inside Minneapolis’ City Center, Main Floor. (Yes, it does feel weird to have a theatre in there, but it works! Park in the Marriott ramp, save your stub and parking is only $5.) It’s not a “chick flick” by any means. The guys in the audience, although a minority, were laughing as hard if not more than the women. Also, there are vignettes that feature different historical eras, so all ages (18 and up) will relate. And no worries if you go on a “work night,” you can grab a coffee (or glass of wine) at the theater and settle on in.
Read Matthew Everett’s from its Minnesota Fringe Run (August 2009).
Coverage of issues and events that affect Central Corridor neighborhoods and communities is funded in part by a grant from Central Corridor Funders Collaborative.