Traffic passes under the 15th Avenue railroad bridge on Tuesday, February 19, 2013, between the Como and Marcy-Holmes neighborhoods. The bridge is in poor condition according to city documents. (Photo by Amanda Snyder)

On a bright, cold Tuesday morning, Christian Skaret stared up at the rusty, hole-ridden steel under the 15th Avenue bridge.

“I get really nervous when there’s a train going over,” he said. “It just feels like it’s going to crumble.”

Skaret, a sophomore studying sports management, business and marketing at the University of Minnesota, walks under the bridge almost every day.

The bridge that hundreds pass below daily and concerns some residents is separately owned by Burlington Northern Santa Fe Corporation and Union Pacific.

The more than 100-year-old structure is actually made of two bridges built 30 years apart, and the two owners don’t have to send regular inspection reports to the city or any other government agency.

Each year the city makes inspections and sends its recommendations to the railroads, but it can only make minor repairs if there’s an immediate danger to the public.

“All we do is note the issues we’ve seen, which would include the minimal things or just a livability issue such as graffiti, debris on the bottom flange, and we forward our annual report to the railroads,” said Jack Yuzna, a bridge engineer for the city of Minneapolis.

It’s the railroads’ responsibility to manage bigger issues with the structure, he said.

The Federal Railroad Administration requires railways to adopt bridge inspection procedures and conduct internal audits and can request to review inspections from railroads.

But the companies’ reports are not public, their inspection ratings are different from the city’s, and they are not required to submit them to the FRA.

“According to federal law, the railroads are obligated to do bridge safety inspections on their behalf,” Yuzna said. “But they’re not obligated to share the information and to date we haven’t received any of their reports.”

City inspectors are not allowed to go on the deck near the tracks since they are owned by the railroads and would be trespassing, said Heidi Hamilton, the deputy director of public works for the city of Minneapolis.

The city last inspected the bridge in May, and said the Union Pacific portion of the bridge was in “poor” condition.

The report said the steel girders, floor beams and columns were heavily rusted.

The city report for the BNSF bridge rated the portion directly beneath the deck — where trains travel — as in “fair” condition but the base of the bridge as in “poor” condition.

It said the steel columns had “severe rust,” which is “causing deformation and buckling.”

Ted Galambos, a professor emeritus of civil engineering at the University of Minnesota, said heavy rust is significant.

“Depending on how much of the original steel is rusted away, that certainly would affect the strength,” he said. “If you take things away, things get weaker.”

The last time UP made any repairs to the 15th Avenue Bridge was in 1994, said Mark Davis, the director of corporate communications and media for the company. He said the bridge is “structurally sound.”

Amy McBeth, the director of public affairs for BNSF, said no repairs have been made by the railway in recent years to their part of the structure because none have been necessary.

“We have a rigorous inspection program,” she said. “Nobody has a greater interest than we do in ensuring the safety of our bridges.”

McBeth and Davis both said that if repairs needed to be made, the two railroads would be in contact with each other and the city. Hamilton said that not every part of the bridge is critically important.

“In a bridge you can have pieces that are in poor condition, and it doesn’t mean that there’s any sort of a safety hazard,” she said.

But Galambos said that every part is necessary.

“They’re all important — it wouldn’t be there if it weren’t important,” he said.

If there were concerns for pedestrians or vehicles going under the bridge, the city would take action, Yuzna said.

“We do not have safety concerns for the traveling public under the bridge,” Hamilton said.

Concerns about the safety and appearance of the bridge have caught the eye of residents.

Ricardo McCurley, neighborhood coordinator for the Southeast Como Improvement Association, said that the group has worried about drainage and lighting under the bridge.

“The water, and the inadequate drainage [the railroads have] created — the leaks, that entire system just doesn’t seem to be working,” he said. “That causes lots of hazards, whether it’s slick conditions underneath, blinding conditions when the rain is falling and icy conditions in the winter.”

Sports Management senior Mitch Fiereck said that the leakage is what bothers him about the bridge.

“It’s mostly just the dripping of water on your head that comes from God knows where that I don’t like very much,” he said.

Cam Gordon, the city councilman for Ward 2, said it would be nice if the railroads reconstructed the bridge.

“We don’t want it to get to such a poor point that they don’t do something first, but they will fix their infrastructure when it needs it,” he said.

Due to the heavy traffic underneath the structure and its proximity to the University, it would be difficult if they decided to make significant repairs, he said.

“We’d have to really think about it carefully in terms of the timing and the staging,” he said. 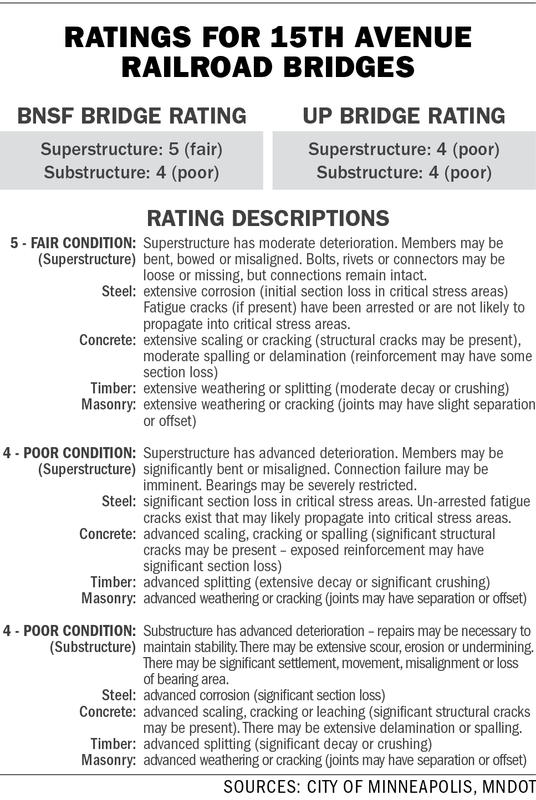