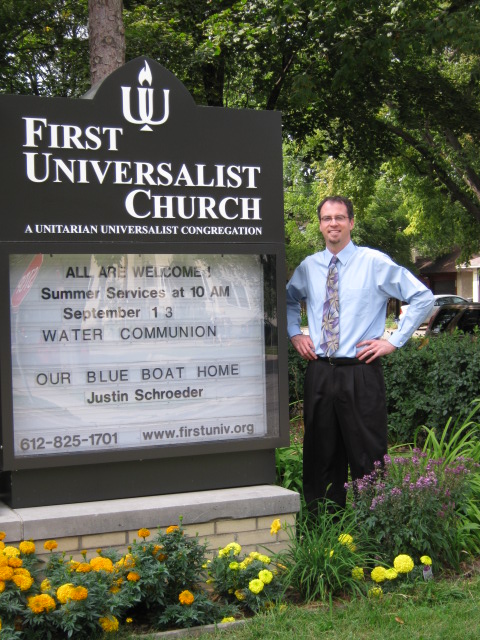 “As a church, we believe in bearing witness to the Universal Love and underlying unity that holds and connects us all, and that invites us to become fully human, alive, and of service to something larger than ourselves.” - Justin Schroeder, senior minister, First Universalist Church. (Photo by Phyllis Stenerson)

First Universalist Church, a liberal congregation located in south Minneapolis for much of its long history, will celebrate a trio of joyful events on Sunday, October 25.

Members and friends will gather at 10 a.m. for an intergenerational “Homecoming Service” to mark the church’s 150th anniversary, followed by birthday cake in the church’s social hall. At 2 p.m. Justin Schroeder will be ordained into the Unitarian Universalist ministry and also will be installed as the congregation’s senior minister. A reception will follow with festivities and light refreshments — and more cake.

The public is welcome at the services and celebrations at the church, 3400 Dupont Avenue. (The church moved to the site of the former Adath Jeshurun Synagogue in 1993.)

“We haven’t had such a big day for many, many years,” said Barry Johnson, congregation president. “This is really a historic day for our church as we recognize 150 years of involvement in the community and also inaugurate a new era.”

Schroeder said, “We want to continue to connect with the community and get to know our neighbors and their needs. We want to be of service and work for justice.”

Unitarian Universalism is a creedless faith that affirms and promotes the inherent worth and dignity of every person and finds wisdom from the world’s religions to inspire ethical and spiritual lives.

As Schroeder puts it, “We believe in love; not sentimental, romantic love, but ‘love with teeth,’ the love that cast us into being and invites us to serve something larger than ourselves. And we believe in hope; not blind, optimistic hope, but the hope that comes from imagining how the world might be, and the sure knowledge that everybody matters to God. No one is left behind. We all have a role to play in the healing of our world. Ultimately, we believe that love and hope are more powerful that fear and death.”

The Unitarian Universalist theology has evolved over hundreds of years, but has always stressed universal salvation. (A whimsical motto of First Universalist, printed on pencils for the 150th anniversary, is, “No hell for 150 years.”)

Before he was called to First Universalist, Schroeder, 34, worked for Unitarian-Universalist churches for 12 years, most recently as Director of Congregational Development at Unity Church Unitarian in St. Paul.

His wife, Juliana Keen, is a recent graduate of the University of Minnesota with a master’s degree in public policy and social work. She’s teaching a class this fall at the university in social work. Their son, Tucker, is nine months old.

Today First Universalist is active and growing, with nearly 900 adult members, and is one of the nation’s largest Unitarian Universalist churches. It sponsors Unity Leadership Programs the goal of which is to engage and empower a new generation of youth working for social change; gathers hundreds of winter coats for children in need; serves meals at Simpson Shelter; welcomes gay, lesbian, bisexual and transgender people and promotes peace and justice in numerous ways. First Universalist also is known for its fine music and arts programs.

Schroeder will be only the tenth settled minister in 150 years. One ministry, that of Marion Shutter, ran 48 years, from 1891 to 1939, and the one before that, James Harvey Tuttle’s, lasted 25 years. John Cummins, minister emeritus, served First Universalist from 1963 to 1986. Cummins was especially active in the civil rights movement and marched with Dr. Martin Luther King, Jr. in Selma, Alabama in 1964.

When First Universalist church was founded October 24, 1859 Minneapolis was a new frontier town in a one-year-old state. In many respects, it still was a wild, untamed place.

Streets were grimy dirt roads, spotted with horse manure and tobacco spit. Pigs, dogs, chickens and even cows roamed the city, despite citizens’ complaints. Women who ventured out on the filthy board-walk streets could hike up their ankle-length dresses (to a modest level), but their laced-up boots and layers of petticoats were caked with muck. (No fun to hand-wash, starch and iron.)

Not only were there no computers, IPods, cars or televisions, there still were no streetcars, indoor toilets, electricity, telephones or telegraph service.

But the place was booming. Between 1849 and 1858, Minnesota was the fastest growing place in the United States. And the church grew with it. Early congregation leaders included some of the city’s big shots: William Drew Washburn, a miller whose family operation eventually became the General Mills Company; Dorilus Morrison, a lumbering giant and the city’s first mayor, and Thomas Lowry of streetcar fame.

Church founders were among the organizers of Lakewood Cemetery in 1871, four years after Minneapolis was incorporated as a city. Col. William S. King, a local businessman, newspaper publisher and First Universalist member, proposed that a cemetery be established where “the encroachments of the city would never seriously interfere.” That was at 36th Street and Dupont Avenue (also called King’s Highway, for Col. King), now smack-dab in the city.

The church has been known as a leader in social justice for much of its history. Its Unity Settlement House in north Minneapolis began its work in 1897 and tapped Caroline Crosby as its head resident in 1904. She developed a free kindergarten, a mother’s club, day nursery, a sewing school, library, gym and probation office.

Peg Meier is a member of First Universalist Church and lives in Bryn Mawr.