“My daughter surprised me with tickets to your show tonight. I used to play your albums for her when she was a girl,” confided an excited fan to Helene Foussart, one half of Les Nubians after their performance at the Dakota Jazz Club in Minneapolis. “Now she is bringing me to see you all perform. It has come full circle!”

The woman’s daughter spoke to the way their music had inspired and shaped her as a young woman. Helene with a disarmingly warm smile, hugged each woman with intense gratitude. Humbled by the impact of their music reflected in the appreciation of two generations of fans.

Les Nubians arrived on the music scene in 1998 with their first album Princesses Nubiennes, offering a sound that was unique and fresh while bearing homage to sounds that were pure, deep and ancestral. This album echoed a soulfulness borne from the influence of a dual French and Chadian upbringing of sisters Celia and Helene Foussart. Evident in this debut was an inherently African soul, a jazzy sensuality and the contained intensity perfected by fellow iconic Afro-European singer Sade.

Their career would find them working with rappers such as Mos Def, Talib Kweli and Guru, these musical collaborations adding an unexpected dimension to the hip-hop renaissance of the late 1990’s and early 2000’s.

Celebrating 15 years of music, the self-proclaimed “Afropean” hip hop/rhythm and blues duo reminisced musically with their Twin Cities’ fans at the Dakota on September 6th. They arrived on stage in their characteristic intercontinental elegance and style. Each woman adorned in sculptural skirts of green army fatigue, creatively coiffed natural hair, laced crop- tops, cowrie embedded belts and glittery stage make-up reminiscent of the queens of Fela Kuti. The sisters with seeming ease are able to coalesce all of the elements of their identity within the tapestry of their music and fashion. 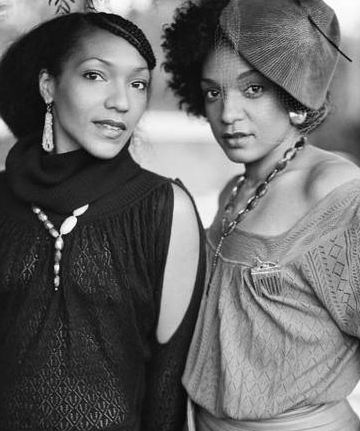 The songs performed at this performance made evident the duos’ prowess in musical alchemy. Each song expressing how the sisters have fearlessly included elements of African and African Diasporic music exemplified by a dutty reggae bass-line, a romantically lilting samba or a tender and rhythmic French soul ballad.

Performing with the Nu Revolution Band, the ladies were energetic and electric, dancing, laughing and clearly enjoying themselves, thanking the audience for the last 15 years of supporting their music. Towards the end of their set, they sung “Makeda,” the first single from their debut album. After leaving the stage, they were summoned by a roaring crowd back to the stage where they sung “Temperature Rising,” to an audience that had abandoned the seating of the venue and danced freely in the aisles.

A gentleman in the crowd wanted to share something special with Helene and Celia after the show. The jewelry designer and long-time fan of Les Nubians presented each sister with necklaces that were made of copper wire wrapping an ancient fossil. He told them he was inspired this morning to make the necklaces for them. Like excited 7 year-olds on Christmas, each sister immediately put their necklace on, holding it in their hands and modeling it for one another.

The jewelry artist explained how the copper has healing properties and the fossil in each of their necklace is the half of an original whole, connecting the two women. “How do I show gratitude?!” a clearly overwhelmed Helene requests of the gift giver in a hypnotic French accent. “ I am overcome with gratitude, I struggle with expressing it, I feel like I want to…” staring up at the sky, she let’s out a joyful shriek accompanied with a deep, blissful smile.