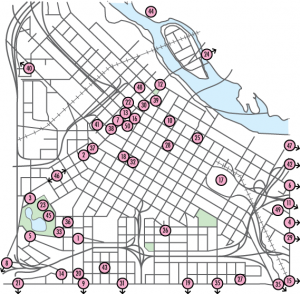 Bet you didn’t know that Solera, a downtown Minneapolis restaurant, is housed on the site of a former X-rated movie theater, or that the first governor of Minnesota was rumored to have had “unnatural sex” in his mansion with a gubernatorial stable-hand.

“Minneapolis has a lot of queer history,” says Van Cleve, “it just tends to get glossed over because of our image as a part of ‘flyover territory.'”

With that in mind, Van Cleve set about pawing through the Jean-Nikolaus Tretter Collection at the University of Minnesota, one of the world’s largest compilation of LGBT historical documents and materials, trying to piece together the queer history of the Twin Cities for a competition run by OutHistory.org. The Tretter Collection started out, Van Cleve said, as the private collection of Jean-Nikolaus Tretter, a Vietnam veteran, former Navy linguist, spy, and local LGBT activist.

“He started collecting whatever was around: newsletters, pamphlets, the immediate material that activist groups were producing,” Van Cleve said. “He got a reputation as an odd guy…but people kept passing him little scraps of the movement, thinking ‘Jean might be interested in this.'”

Tretter’s private collection took a turn for the historically significant in 1983, when representing Minnesota at that year’s Gay Games in Los Angeles. While there, he met Jim Kepner, a premier gay archivist and activist. The meeting convinced Tretter to collect in a more systematic way, chronicling the worldwide evolution of LGBT life and culture. Since 2001, the collection of photos, pamphlets, memorabilia, books, and many other documents has been housed at the University’s Twin Cities campus.

Drawing on this vast archive, Van Cleve has put together a list of the 50 queerest places each in Minneapolis and St Paul, starting with Governor Alexander Ramsey’s house (of stable boy infamy) and Minneapolis’s Gateway District (site of the Gay 90’s, and the city’s first Gay Ghetto, which was destroyed in 1960’s urban renewal projects). Van Cleve continues on through the 1970’s-era lesbian separatist enclave in St Paul’s West Seventh neighborhood, and continuing into the present with Minneapolis’ Boom Island – site of last year’s Black Pride – and Stevens Square Park, the launchpad for the yearly Trans March. Van Cleve cuts a broad swath with the 150-plus-year tour, showing the disparate threads of the Cities’ LGBT history intertwine and how they have been partially woven into the the history of other “undesirable” groups – Blacks, immigrants, and the homeless – as well as the history of politics and power. It’s not all heavy history, though: Van Cleve still included all your favorite bars and the hottest (historical) cruising spots.

Van Cleve, an Urban Studies graduate of the U of M, was drawn to his project, he said, by a love of local history. He said he hopes to win the competition – first prize is worth a $5,000 grant from the Arcus foundation – but wouldn’t ever want to turn it into a book.

The best part about the project, said Van Cleve, is the openness of the list: designed as a Wiki, enabling anyone to upload their (researched) history of a place in Minneapolis.

“Anybody’s welcome to comment and tell their stories,” Van Cleve said. “Email me and tell me a story, and I’ll try to put it on the site. That’s the best part about GLBT history, the personal accounts.