Eagan biked these miles because she decided to go 100 days without using oil to see how much oil she actually used in five major areas of her life: transportation, food, waste, water and electricity.

Eagan graduated this spring from the University of Minnesota with an architecture master’s degree in sustainable design. She started the 100 days last August and ended the project in mid-November.

The documentary “No Impact Man,” along with her study of sustainable design gave her the idea to go 100 days without oil.

After working on a green project in her sustainable design class, she wanted to take this one step further by experiencing how living without oil would impact her life.

Eagen discovered petroleum-derived ingredients are in pretty much everything we buy from body soaps to deodorant to food packaging because oil is used to make glycerin and plastic.

“Oil is everywhere. Trying to find replacements was a huge shift,” she said.

She started a compost bin for food scraps to help reduce her waste to zero. But Eagen’s first attempt at composting ended up putrid and rotten. A friend told her to start using red worms, which consume the food material in a faster, odorless way. 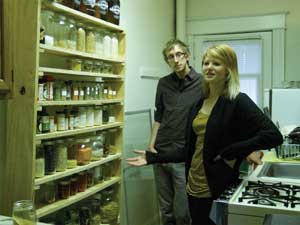 Left: Molly Eagen, 26, with her boyfriend Kevin Ellingson, both of Minneapolis. Also pictured is a shelf they built for her bulk food supplies. Eagan only bought food that came from a 300-mile radius.

Good hygiene is important to Eagen, so she continued to take showers every day. A 10-minute shower uses about 20 gallons of water, Eagen discovered. She estimates she was using about 55 gallons of water a day for things such as showers, laundry and dishes.

Average rainfall ranges from 18 inches in northwest Minnesota to more than 32 inches in the southeast. Eagen figured out how much rain barrels on her roof could capture if it rains 29 inches a year. That equaled about 90 gallons a day. Since she was living in a duplex with five other people, she figured that her daily water ration should be about 15 gallons.

That meant taking a one-gallon shower out of a bucket. As it got closer to November, the showers became colder.

Going without oil also affected what Molly ate. Her normal morning breakfast of coffee and bananas was no longer acceptable because neither can be grown in Minnesota’s harsh winter climate, so they are shipped from warmer climates and that uses gasoline.

Eagen allowed herself to buy only food that came from a 300-mile radius, far less than the 1,500-mile radius she says the average American dinner comes. “I had to spend my first few weeks eating mostly vegetables and biking 12 miles a day,” she said.

Eagen found that some things were hard to replace, such as coffee. But she adapted easily to most of the changes, such as bike riding and walking.

Living without oil in the winter is tough when locally grown food is limited to potatoes, onions and apples, you have to bike through snow and ice, and you have to heat your home.

“Unlike many of the other electrical uses which can be minimized, space heating in a climate like Minneapolis is a necessity,” said Eagen.

She gave a lot of thought to what area of the world would be easiest to live without oil, and realized each location has its own struggles. In Arizona, it would be difficult to get enough rainwater. But California would make it a lot easier to have a constant supply of fresh food.

Eagen says that she needed to ask the people around her for help. Kevin Ellingson, who is now her boyfriend, was there to help her bike home late at night, and even figure out diverse local-food dishes.

Though she is no longer living strictly oil-free, Eagen continues to buy bulk items, bike, and be careful with how much water she uses.

She plans to use her experience to design features for environmentally friendly houses and influence government environmental policy.

In September, Eagen will begin collaborating with Megan Hoye on a new experiment, called the “Three Actions Project.” Eagan is hoping to persuade a large group of people to pick three things to do differently for two months in ways that help the environment and give them the kind of real-life experience she had.