Last week, Connect Minnesota released a report on telework in Minnesota. I’m a little slow on the uptake reading it because ironically, I have been travelling to my annual summer exodus to Ireland. So I am acutely aware of the benefits of telework. To cut to the quick numbers…

According to Connect Minnesota’s 2011 Residential Technology Assessment, 22% of Minnesota adults who are employed fulltime or part-time say that they work from home, or telework. 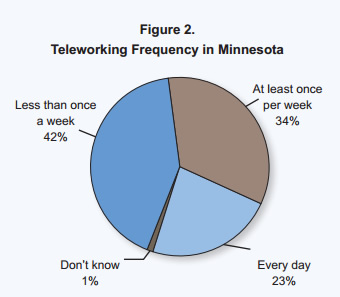 The report paints a picture of folks who currently telework…

The report highlights some of the community benefits of telework…

It’s great to have the facts and figures behind telework but I wanted to couple it with some of the recent stories we’ve posted on the blog about the benefits of teleworking. One story we haven’t posted is the my own story. I’m in Ireland. I’ll be here for 6 weeks. I suspect that had I not mentioned it, few would know the difference. I’ve been doing this sort of travel for a number of years (5?) and at this point, I won’t even bother to tell half of my clients. I don’t move for work – but I can move because of my work. It gives my husband a chance to “live back home” for a while and my kids the chance to know the Irish side of their family. The only requirement? I must have broadband.

Then I think of Dick Sjoberg at the last Broadband Task Force talking about the need for skilled workers in Northern Minnesota. He mentioned that Impact 20/20 had been trying to persuade skilled employees to move to the area (which is beautiful) but found that the north woods is not for everyone. They realized that they don’t need the people necessarily, they just need the skills and often those skills can be shared online. They are now looking into options that would encourage local employers to look into telework for staff based in other locations, such as the Twin Cities.

The flip side of that coin is Fergus Falls. They are striving to make telework part of their tapestry by encouraging local businesses to hire teleworkers, to encourage local workers to build telework-friendly skills but also by promoting themselves as a mecca for telework options. Fergus Falls has created a local telework center, they have been deploying broadband infrastructure in the area and they have actively advertised their area in and out of the state. They have found at least one company to move to the area because of the telework options and have seen much more interest in the area because of the focus.

Telework could be a way for a rural community to attract the Brain Gain demographic that is looking to move from metro to rural areas – but generally does not move for a job. They move for quality of life – but consider the possible attraction if you as a community could offer good schools, safe streets, beautiful natural surroundings and access to good jobs. It seems like a reputation worth pursuing both at the community and state level.